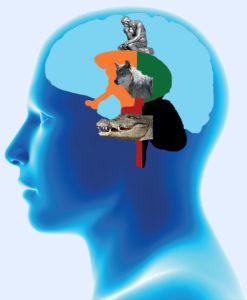 This triple psychological stratification has its foundation in three brain layers: the brain stem and similar structures (“reptilian brain”), the  limbic system (“mammalian brain”) and the neocortex (“human brain”). This well-known triune brain theory was developed by the American neuroscientist Paul MacLean (The Triune Brain in Evolution, 1989).

This integration – and years of hard work – eventually caused psychostratics to develop into an abstract model with a high degree of internal consistency (coherence), which is falsifiable (scientific ) and which does justice to the whole range of human behavior. Translated to the well-known parable of blind men who regard a part of an elephant’s body as the entire animal (the human mind), this means that only with psychostratics the whole of the elephant is looming. However, this animal can use some flesh on its bones. The fact is that within current psychostratics a whole of connected concepts predominates (the elephant’s skeleton). A future, more empirical approach to psychostratics will have to lead to a fleshier elephant.

Within the psychostratic model, self-preservation and preservation of the species are important. (This comes as no surprise, since triune brain theory is the foundation of psychostratics, and the evolutionary perspective is central to that theory.)

Oedipus complex The development of oedipal preservation of the species (infantile genital sex) leads to an impasse, the Oedipus complex, which can only be ended by entering the secondary phase.

(2) Secondary Phase During this phase (primary school age; “latency period”), “instinctual functioning” is inhibited by “emotional functioning”. This inhibition enables, for instance, concrete cognitive development (“non-abstract thinking”), which is to a large extent a sublimation of striving for non-genital sex (preoedipal preservation of the species.)

Puberty The secondary phase ends with puberty. This transition to the tertiary phase is characterized, on the one hand, by becoming biologically mature, causing “instinctual functioning” to resume its rights to a significant extent (in particular alcohol and drugs; conflicts of power; and sex). On the other hand, there is a rapid development of  “abstract cognitive functioning” during puberty. Inexperience with this abstraction ability can all too easily lead to embracing of religious or ideological views that are abstract and fundamentalist, also because these views can reduce the uncertainties of this period.

(3) Tertiary Phase On entering the tertiary phase (adulthood; partly Nietzschean Apollonian man), “abstract-cognitive functioning” has won the battle, and it reigns over “emotional functioning” and “instinctual functioning” like an enlightened sovereign. Therefore, this phase is characterized, briefly speaking, by the rational development of a bourgeois life.

Midlife Crisis The development mentioned above is generally prevalent. This is less and less the case for the subsequent transitions and phases. For example, not every adult undergoes the next transition, the midlife crisis. This transition arises from uneasiness with a life that is overly ordered, rational and reasonable. On the one hand, this can be experienced as being too oppressive, but on the other hand, as a thin layer of varnish, threatened by the breakthrough of alienation and existential fears. In short, people either want to really feel alive again, or they want to lose themselves in abysmal wallowing, as they did  in puberty!

(4) Integrative Secondary Phase If the midlife crisis are  actually followed by a qualitative (“irreducible”) change of behavior, than these crisis give way to the integrative secondary phase (in part Nietzsche’s Dionysian man). In the human being of this phase, “emotional functioning” is central, but also “cognitive functioning” and “instinctive functioning”  play an important part. On the one hand, there may be the pursuit of grand and compelling lives, like that of Van Gogh or Jim Morrison (The Doors). On the other hand, this phase may concern a tragically romantic conception of life, where people experience that hidden behind a thin layer of rationality, morality and love lie misunderstanding, sickness, misery and ultimately death. An example pur sang is the work of the French author Michel Houellebecq.

Romantic Crisis In time, people may find out that the eyes they viewed the world with during puberty have vanished for good. Both feeling and spontaneous life and existential wallowing in worries lose their charm, or even become something they dislike. The Romantic crisis has arrived. The core of this crisis is awareness of stagnation, of eternal hanging out in the playground of a person’s second puberty.

(5) Integrative Tertiary Phase This crisis often results in a return, sadder but wiser, to the ordered and safe life of the tertiary phase. However, if awareness of stagnation results in people changing their behavior quantitatively, they are entering the last, integrative tertiary phase (partly Nietzschean creative man; “wisdom”.) In this rare case, the guidance of integrated psychological functioning is shifting from “emotional functioning” to “cognitive functioning”. This means that each of the three modes of functioning can be sufficiently expressed, but that the frameworks for “instinctual functioning” and “emotional functioning” are ultimately set by “cognitive functioning.” The latter functioning is mainly aimed at gaining insight into people and the world. The psychological constellation of the integrative tertiary phase enables qualitative (“irreducible”) development, whereas the integrative secondary phase has quantitative (“reducible”) development. An example of limited qualitative development within the framework of preoedipal preservation of the species are the different periods in Picasso’s work (for instance Blue Period, Rose Period, African art and primitivism and Cubism.)